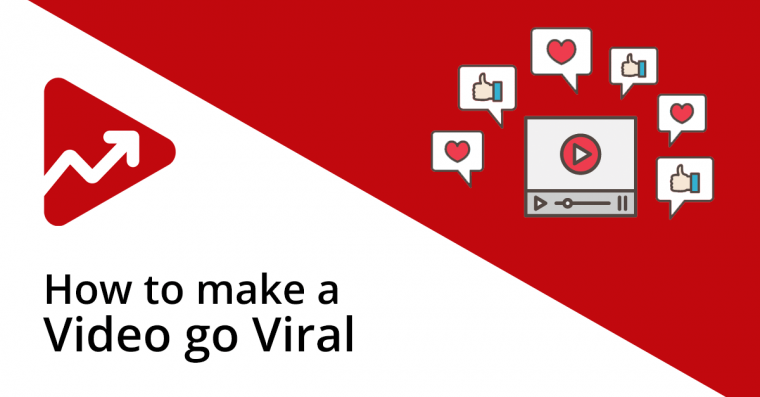 There’s no magical formula for how make a YouTube video go viral. Viewer preferences are subjective, and factors like competing videos, distractions in the news, or a sudden shift in trending keywords are outside of our control.

While it’s not an exact science, the good news is that there are common factors in what makes a video go viral.

We’ll share some of the elements that viral videos have in common to help you develop your own winning videos.

What is a Viral Video?

PCMag defines a viral video as:

“A video that spreads quickly across the internet.”

While there is no “official” number of views that categorizes a YouTube video as viral, it’s generally understood that the views should be in the millions.

A viral video spreads mostly organically, through individuals sharing the video on their social pages, in emails, or rewatching with friends. This contrasts with ubiquitous videos that achieve their position through aggressive ad spending – think Coca-Cola ads.

Many of the content guidelines are the same for those social platforms, though TikTok relies much more on a large quantity of short videos while Instagram videos more closely resemble shortened YouTube content and rely heavily on hashtags to gain traction.

Elements of a Viral Video

Aggressively sharing your new video will not gain you much traction if the video itself is not high quality to begin with.

Sometimes a video goes viral spontaneously – Britain’s Got Talent did not expect Susan Boyle’s audition to be a worldwide sensation, for example.

More often, video creators are following best practices to engage their audience. This will help take out some of the mystery behind how does a video go viral?

Successful viral videos tend to have the following things in common:

They are short: While some viral videos can be up to 30 minutes long (like a 2012 Invisible Children expose) Commscope reports that the top ten videos on YouTube averaged 4.5 minutes long. One and half minutes is a good length.

Emotive connection: People are wired to connect with others. Inspiring, funny, tear-jerking, or cheerful videos are more satisfying to watch and will be shared more frequently.

Clear point: Your video should have one main point. Though a longer video, “A Day in the Life of a Michelin Star Chef,” tells you exactly what you will be seeing.

Catchy Title: Connected to the clear point of your video, the title should be attention grabbing without seeming like clickbait.

Humor helps: Viral videos tend to be funny. Video content is interruptive – viewers pause their regular day to watch something. If you’re wondering how to get a YouTube video to go viral, consider adjusting your tone.

Consistent tone: What if your brand is serious rather than funny? It’s better to maintain consistency than try to fit trends. Many viral videos are also heartfelt, uplifting, inspiring, or informative. These all make an emotional connection while maintaining an authoritative brand voice.

Know your target audience: Just like any other online content, you should create your videos with your audience in mind. Track demographics before, during, and after video posting.

Worldwide, 500 hours of video content are uploaded to YouTube every minute. Even if your content is perfectly produced, it will be difficult for your viewers to find it unless it is optimized for search.
While YouTube is an entertainment platform, it is also a search engine – the second most popular after Google. How to make a YouTube video go viral partially depends upon making the most out of YouTube’s algorithm.

Some strategies for optimizing your videos to help them go viral include:

Keyword Research: Use a keyword research tool like TubeRanker to identify trending keywords for your channel.

Long-tail keywords: Primary keyword that contain 3-4 words can narrow your audience more specifically – think “how to bake the like the Great British Baking Show” rather than “how to bake.”

Video Titles: Your primary keyword should appear in your video’s title, meta description, and description, all while keeping it short and catchy.

Tags: Use your main keyword as your first tag, and then add both broad and specific tags to give your video additional context and help YouTube rank it more accurately. Stick to 8-10 tags that specifically describe what your video is about.

Engagement: Asking people to leave comments and subscribe to your videos helps your content rank higher in YouTube’s algorithm, which means it turn the search engine will return your videos higher in the SERP.

More Competitor Research: Find out what keywords your competitors are targeting. Identify where you videos can fill gaps in their content or rank for separate by related long-tail keywords.

The example below is from “Indian Chef Reviews Frozen Indian Food”:

Many people wonder if posting time holds the secret of how to make a YouTube video viral. Research suggests that for English-speaking audiences, posting in the morning and on Thursdays and Fridays give you a better chance to capture more viewer attention.

You can also analyze the performance of your videos by viewing your personalized timetable.

If your videos uploaded on Fridays and Mondays tend to do consistently better, for example, consider making that your regular posting time.

Marketing is a key component in figuring out how to make your video go viral. This means sharing your content to as many sites as possible and leveraging your network to get them to share it as well.

Research suggests that sharing to Facebook may be the most successful strategy in how to make a YouTube video viral. 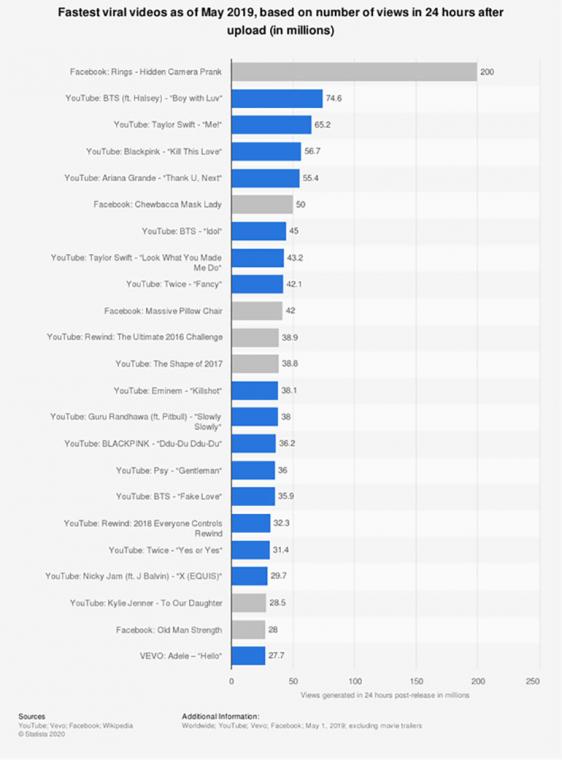 The top tip for social sharing is to know your audience. This will determine when and where you promote your content the most energetically.

Sharing to as many channels as possible until you find the one that gains momentum is also a solid strategy. That’s what Karen X. Cheng suggests in how to get a video to go viral. Sharing to Reddit let to blogs, which ultimately put her video on YouTube’s front page:

To boost engagement with your videos, use your end screens wisely.

Your end screens (also called video outros) are where you place your Call-to-Action links, buttons, and other important information about your brand. You can use the same end screen across videos for consistency and to speed up batch processing videos.

There are many free templates available (like the one below from LetUsCreateSomething) that include the following elements: 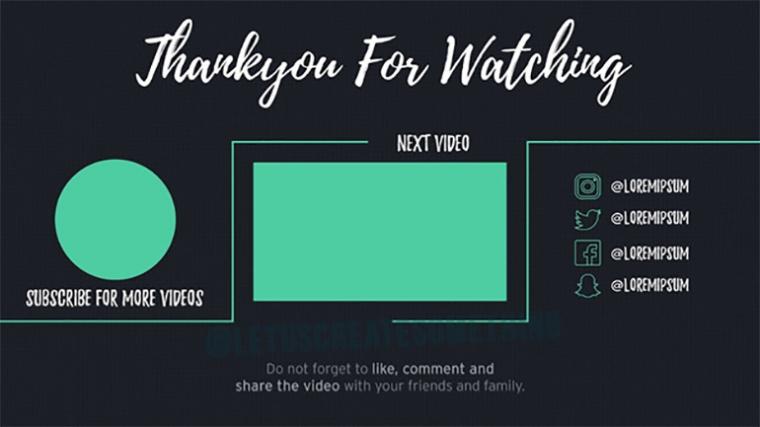 Another strategy is to continue the engagement after you post the video. This mostly means responding to comments, which can be good indicators of the type of content your audience wants to see.
It also means maintaining your analytic strategy, like measuring how many views, clicks, and subscriptions were generated by a particular video so you can recreate successful content strategies in the future.

The company’s founder and star of the video, Michael Dubin, cites his background in improv comedy as the core of the commercial’s success. Dubin shared:

“I was just really trying to find a fun, resonant way to tell the story of what our business did and why it existed.”

The video was also released at a strategic time – right before the massive South By Southwest conference in Austin. The video runs about a minute and a half. The point is short and sweet: our blades are cheap and awesome.

We can see that the DSC used several of the key viral video tools:

Content creators spend hours chasing viral video success. The secrets of how to make a viral video lie in:

Paying attention to each of these categories increases your chance that your YouTube videos will go viral.